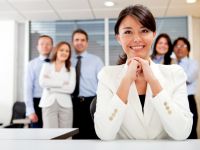 Extensive studies show that women across all countries have significantly lower Self-Esteem than men. This is often reflected in a lower degree of Confidence: in spite of proven leadership effectiveness, many women still doubt their capabilities, which may affect their happiness and success.

Fortunately, it is possible to increase both Self-Esteem and Self-Confidence. Find out about the ”Irresistible Me” program.

Let me start by sharing my story.
FROM OPERATIONAL LEADER TO EXECUTIVE COACH

Fifteen years ago, when I was working as Business Development director at an international company, I co-created an informal ”Diversity” committe; together with 5 other international female leaders, we approached our CEO and offered to add to our – already busy – list of responsibilities, the self-selected task of better utilising the pool of female talents within the company. We got his blessing and started to work under the HI-POWER name (acronym for High Performance Of Women Executive Resources).

Throughout five years of activities, we masterminded and implemented a number of initiatives, that included: organising opportunities for top management to meet several female talents from different parts of the world; training and awareness workshops; assessments to identify ”hidden talents”; profiling women on intranet; external networking to bring in role models; offering female participation to strategic committes around transformation projects; measuring progress in terms of female presence in key positions; and standing up ourselves as role models for our younger colleagues. We did all this while holding our operational positions, thoroughout various promotions and expatriate assignments; we did it while taking care of our families (husbands, children, parents and friends). We held our hands together and did not loose courage when meeting the inevitable cynicism of some peers or the occasional threat of one or two short-sighted bosses. We worked hard, learnt a ton and had a lot of fun. We were supported by hundreds of positive messages of appreciation and by the sheer results that we managed to obtain. We significantly contributed to increase female presence in key positions, to identify female talents that had gone completely undetected, and to raise awareness of how much potential was at risk of being underestimated.

After five years of juggling all these additional priorities along our jobs and families, we were happy to finally delegate the follow-up to a newly created function within HR.

When five years ago I decided to quit my corporate job to become a leadership consultant and a coach, I continued to honor the same desire to help talents shine. I have since helped men and women, in various executive, senior and middle management positions, become more self-assured and influental.

The second part of the story is not about me, it is about a mystery.
THE OVERLOOKED TALENT POOL OF +40 WOMEN LEADERS

One of the greatest misteries in Leadership Studies is the current inconsistency between the measured high effectiveness of female leaders and their scarce presence in the positions where their effectiveness is needed, namely at the top of the corporate hierarchy.

I will for now steer clear of the ”chicken and egg” debate about whether the socio-cultural context is the main contributor to inducing self-doubt in women; or if there is an intrinsic genetic difference in personality traits that makes women more likely to doubt themselves.

The hard facts indicate that:

women in leadership roles are on average more effective than their male equivalent in critical areas like taking initiative, delievering consistent results and being role models of integrity (1);
women are become significantly more effective than their male counterparts in later years; between the age of 35 and 40, men seem to stop focusing on self development and they tend to fall behind on effectiveness (1).
women have a significantly lower self-esteem than men and the gap increases with age, whereas men build a lot mre self confidence with age than women (2).

Another well know fact is that women continue to be under-represented in senior positions (3).

So what does this tell us? First of all it tells us that there is an underutilised potential in the pool of +40 Female Leaders who are fully capable of effectivley driving business. Second, it tells us that this pool is still insufficienty appreciated and/or visible, which call for additional measures on all fronts (personal and external) to bring them up in the open.

So, this is why I have started to become especially interested in this +40 Female Leaders segment, a too often underestimated pool of extraordinary potential. It is my desire to support these Leaders in their journey to become more visible and get better appreciated for what they know and what they can.

Building on my learning and experience as people manager, HI-POWER catalyst and professional coach, I have developed a seven-step program specifically tailored to this segment. The ”Irresistible Me” 7-step Program for +40 Female Leaders is aimed at achieving three goals:

After an initial Self Assessment and Customised Objective setting, the Program includes seven parts, each of them in three coaching sessions (Personal Brand, From Self-Consciousness to Self-Awareness, Positive Outwards Thinking, Courage of Vulnerability, Channeling Emotions, Power of Influence, Anchoring and Actions)

Are you ready to invest in yourself?

Do you want to know more?